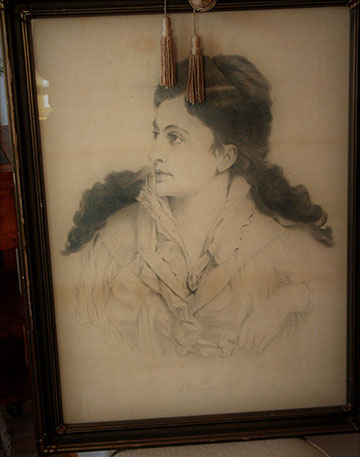 Luckily the ghost that lived in my childhood home was a relative.  Otherwise, I might have grown up afraid of things that go shuffle and stroke in the night. I remember as a little girl, any time there was a bump upstairs or a creak in the other room, someone in the family would reassure me that it was just Aunt Jesse.  I knew her as the explanation for any time my door opened of its own volition or every time I was awakened by a late night loving touch with nothing present to account for it except for the seat mark on my bed next to me.  I knew her as the pen and ink portrait that watched over us from the drawing room wall of our old family house, the brick house. And I knew her as my great great aunt, a strong, willful woman, who loved the Donovan Ranch more than anyone else in the world, at least that is what she used to tell my grandfather when he was a little boy. Grandfather used that anecdote to explain how he could be certain that our ghost was in fact Jesse.  According to him, she had chosen to stay behind until someone came to the ranch and loved it as much as she did.  Only then would she finally rest.

We aren’t completely certain how Jesse McNiven and her older sister Margaret made their way from Scotland, where they were born, all the way to a cattle ranch in Horse Prairie in Southwestern Montana.  We know they emigrated from Scotland to Canada.  We know they became Canadian citizens, but we don’t know how they came to Butte, Montana where they met and married best friends John Donovan (Jesse’s husband) and Ashley Morse (Margaret’s husband).  I like to imagine these two sisters flipping a coin to determine which train they would hop as they embarked on their journey into the then still pretty wild west, just to see what was out there.  And since oral testimony is unavailable, I figure they chose the bustling mining city of Butte to meet men worthy of their willfulness and independence.  In terms of a timeline,  we know that Grandmother Morse cued my dad that she was born around the same time as President Lincoln’s assassination and that the two couples purchased the ranch at a public auction in 1910.

To say they were wholly conventional couples would be an understatement.  John and Ashley were both professionals in the thriving mining town of Butte, but they were probably better known naturalists, who published a variety of guidebooks for surviving in nature and living off the land.  They traveled together with local American Indian guides, who led them on months long expeditions into the far northern territories of North America where they primarily hunted big game.  I like to imagine these American Indian guides as brothers; really as invaluable teachers of all the tricks of the survivalist trade, but historical knowledge demands I acknowledge a much different possibility. My now trained eye is quite skeptical of the old photographs I’ve seen of these men on my family tree posing together with the American Indian guides to commemorate and to mark their various successful expeditions. I will never know for certain if the guides were also counted among the bounty. The fantasy goes down much sweeter.

I do know for certain that our house, built in 1898, served for a time as a stage coach stop servicing weary travelers coming into the state from Idaho. The Red Rock Stage Coach, and others of its kind, followed  and slowly built upon generations old American Indian migration and hunting trails as it transported prospectors, traders and other visitors to Dillon over fifty miles away from the Donovan Ranch stage stop.  The ranch was where Margaret and Jesse (and eventually also my Grandfather) lived and thrived while their men were away.  If only the walls of the old brick house could speak!  What stories they could share of conversations, dreams and life from those days! 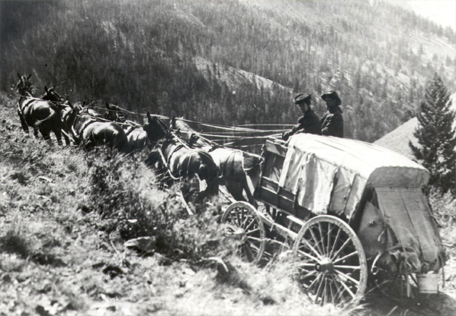 As it was, the walls of our house did have a few stories to tell.  When I was a kid, I remember that the walls were full of paintings  by E.S. Paxson, a good friend to Aunt Jesse and Grandmother Morse.  Since he worked for a stage coach company (as a guard) prior to moving to Butte and then to Deer Lodge to pursue his work as a visual chronicler, I’d like to believe they first met at the ranch. “Maybe he had even stayed there in room 6,” added my dad.  Paxson, a self-trained artist, tasked himself with studying historical sites around the state and interviewing witnesses so that he could paint what might someday be regarded as historical documents. Through his art, he archived great battles, like the Battle of Little Big Horn, when Arapaho, Cheyenne and Sioux warriors decimated General Custer and his men.  Later in his career, he painted the final days of life in what we now remember as the wild west; scenes of trappers, cowboys and mostly white settlers as well as of the American Indians of the region living in the mountains and valleys of Montana as they had for centuries before We took it away from them in the name of progress and the “Great Westward March.”

Fig. 2  Biography of the Life and Work of E.S. Paxon By His Grandson

Most of those paintings now hang on museum walls since Grandfather sold them so that he and grandmother could go on their own adventures.  Their first “world tour” also happened around the time that they moved out of the brick house and we moved in; quite an undertaking.  Everything was taken out, renovated, freshened up, and our things were moved in.  We happily lived there through my high school and college years.  But, as bad luck sometimes makes its presence known, we were eventually forced to sell the ranch and leave the family house for good.

Mom was the last of our family to stay in the brick house.  She wanted to be alone and to say goodbye. As she reminds me, there were no people left on the ranch, the cattle had been sold, and the house was empty with the exception of a mattress and a couple boxes of trash.  Mom recalls that the house was really noisy that last night.  She confessed that she thought “Jesse was mad at” her, at us; which is a funny thing for her to confess since she didn’t really believe in ghosts.  The next morning, mom made her final cup of coffee from the narrow, little kitchen at the front of the house, wiped away her tears and went to load the trash into the truck when she noticed something quite unexpected.  On top of the trash lay open a dusty, old leather book originally intended as a ledger for tracking financial transactions.  It was open to a page with a poem that read that in tough times when people may slander you or you may feel like you hadn’t done all that you could, remember that family will stand behind you.

There is an important part of Jesse’s talks with grandfather that I didn’t mention before.  I didn’t want to spoil the fun.  The book mom found carefully placed on the trash and opened to just the poem she needed on that most difficult morning was Jesse’s.  It had first belonged to Jesse and Margaret’s mother, who began filling it with poetry and cut outs of favorite recipes and other little tidbits.  It was later passed on to Jesse, who continued to chronicle her inner life and love of the ranch.  Mom took the book that she had never seen before and presented it to dad, who also had never laid eyes on it before that day.  He called grandfather, who traveled post-haste to the house, because he didn’t believe mom’s story could possibly be true.

You see, he had loved his aunt dearly, and he had regularly asked Jesse if he could have her book after she died.  Because she always responded that she would leave it to the person, who loved the ranch as much as she, he assumed it would eventually fall into his hands, but it never did.  Following her death, he looked for it, but he was never able to find it.  He confessed that he had looked for it for years before finally giving up and accepting that it must have been lost.  After relaying the story of Jesse’s book and of her promise, he looked up from the pages he had been quietly reviewing, and he said with tears in his eyes, “Barbara, Jesse picked you. You loved the ranch as much as she did.”

It makes sense after all.  Mom and Jesse were both immigrants to this country, both independent, strong women, who found their home and themselves in Montana. Mom, whose story is linked below (to be linked below), traveled from Germany to America with dad a year or so after they were married.  As they have told me many times over the years, she had no idea what a ranch was or what to expect from life there,  but as soon as she and dad drove over Bannack pass on what used to be part of the old Red Rock Stage Coach road and she took her first look at the ranch, she knew she belonged.  She belonged to the land and knew at once that she belonged in a life of agriculture.

Mom now thinks of Jesse every time she wears her diamond dinner ring, because Jesse used to wear it every day, even when she went fishing.  And as for Jesse’s ghost, that was also her last night in the brick house. Her ghost has moved on, but her pen and ink portrait will always be with us, with family.

Note:  I’ll be posting more historical family vignettes at a new site (in case you are interested):  morsestories.wordpress.com